COVID-19 Advice: If you have a booking with a start date before 4th July then we will be in touch. If you choose to contact us then please do so by email to enquiries@cornishcottages.co.uk. Further COVID-19 information can be viewed here. 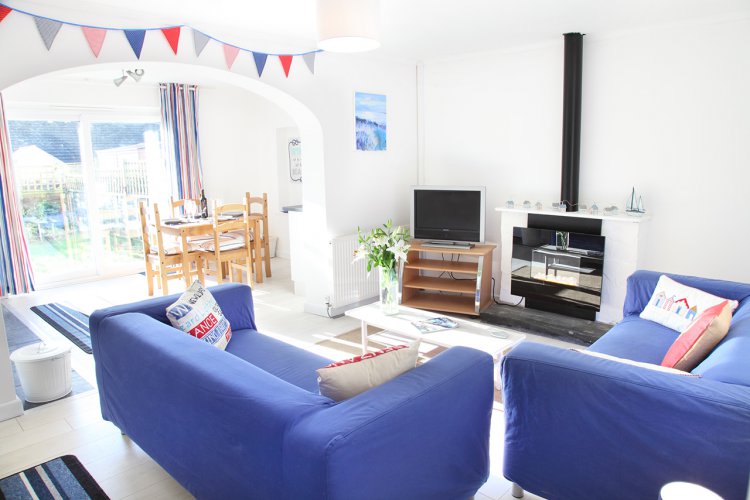 Ruan itself is very convenient with a well-stocked grocery store just down the road, a large recreational park for children, a local market on Thursdays and municipal tennis courts. A short walk down to Cadgwith Cove will give you access to the stony beach with the fishing boats pulled up high. The fishmonger sells fish straight off the boat or if you prefer someone else to do the work you can sample the menus at the Cadgwith Cove Inn or the Old Cellars restaurant.

Miles of coastal walking are available along the stunning cliff tops of the South West Coastal Path and for the less energetic the beaches of the Lizard Peninsula, including Kynance Cove, are just a short car ride away. Situated in an area of Outstanding Natural Beauty, Stargazey will give you access to some of the most stunning scenery the National Trust has to offer. The furthest Southerly Point at Lizard is just 10 minutes away by car - or an exhilarating 40 minute coastal walk. Beaches at Kynance Cove, Kennack Sands or Poldhu Cove are all easily accessible and the beautiful Helford River is just 20 minutes away.

Further afield you can explore the unspoiled far South West of Cornwall from St Michael's Mount, Penzance, Mousehole, Lamorna and Land's End, or take in the hustle and bustle of the harbour town of St Ives - it's up to you!

Stargazey has its own allocated parking space for one vehicle, although more space is often available. The sloping garden path leads to the front door.

The entrance hall, which has bedrooms and bathroom off, leads to the lovely bright living area which has two comfortable sofas, feature fireplace with real flame electric heater and an LCD TV with freeview and DVD player. An archway leads through to the kitchen/diner with its sliding doors to the rear garden which has partial sea views and small patio area with garden furniture.

The kitchen has an electric double oven with 4-ring hob,  fridge with ice box, microwave and a washing machine. The dining area has a table and chairs for four people.

Bedroom one is a double room with 4'6'' double bed, bedside table and lamp, wardrobe and chest of drawers. Bedroom two has a standard 3' single bed, chest of drawers and some clothes hanging space.

The family bathroom has a bath with electric shower over, matching handbasin and toilet and a heated towel rail.

The owner lives in the (soundproofed) apartment above. Stargazey is the sister cottage to Spring Tides next door which has its own parking and separate entrance - for an extended family why not rent them together?

Newly fitted central heating, electricity, bedlinen, towels and Wifi are included in the rental. One well- behaved pet is allowed by prior arrangement at £25 per week.

Short breaks offered at this property

Please select # nights from the duration box above

Need to check your mobile reception? Coverage in many parts of Cornwall can be spotty. You may want to check the reception at this property before booking.

Note down postcode TR12 7JL, click the button below and use it there:


Check Mobile Coverage Disclaimer
Please note that signal maps can be a bit optimistic at times, we cannot be held responsible for the accuracy of mobile coverage information. It is your responsibility to ensure that you have the required level of connectivity before booking. Please contact us for more information.
Options & Extras   Features & Facilities   Special Offers   Customer Reviews   Nearby

You can select these optional extras when placing your booking, some will incur an additional charge as indicated below.